The hedgerows are brimming over with them here in Sussex I am thrilled to say. It's one of the first perennial Spring flowers to bloom and is named after the Latin prima rosa meaning first rose. It's not part of the rose family. It is related to the cowslip. Closer inspection of the flowers reveal that the centres differ- the pin-eyed flowers are the female ones and the thrum eyed the males. They grow on separate plants. It's known by a variety of names but some of my favourites are Jack-in-the-Green, Butter Rose, King-Charles-in-the-Oak and Lady's Frills.

The whole plant is edible. Before picking primroses was prohibited by law they were used to make wine, tea and were the primary ingredient in the appropriately named "Primrose Pottage". They were equally useful medicinally. The whole plant is a sedative and in modern usage its root is infused and used as a cure for nervous headaches.

There is a strong association between rural living and primroses. It was believed that it if children brought less than 13 blooms into the house it would lessen the number of successful hatchings for any chicken eggs in the coop. Butter was rubbed on cows' udders on May Eve to increase the milk yield. To deter witches a primrose ball was hung on the cows' tails on May day in Ireland and bunches left in the cowsheds to stop the fairies from stealing the milk. It was necessary to scatter them on the threshold of your home before dawn if you wanted to stop the little blighters from half inching your butter as well! Bear in mind that if you ate a primrose you might well see the pharisee [Sussex word for the little folk] for yourself.....

As you might imagine primroses feature in folklore. You should never give a single primrose to another if you didn't want to hasten their ending and if you saw a single one growing you needed to dance around it three times to avert bad luck. The Victorians planted them on the graves of their children [you can always rely on the Victorians for a jolly gesture when dealing with matters of death!] Strangely it was thought that if you planted them upside down they would grow pink flowers- despite repeated attempts people found they neither thrived nor survived. During the Middle Ages people made love potions from them and in Germany it was said that the first girl to see a primrose at Easter would marry later that year.

As a footnote we have our own little local primrose tradition. This is the Dedisham Lady whose coffin is in the entrance of a local village church. She was moved to her present site when the earlier church was rebuilt during the 19th century. Little seems to be known about her except that she possibly dates to the 14th century and is linked to the local Dedisham Manor house that once stood a mile away. Every Easter a posy of primroses is placed upon her at Easter- it is not known why nor how long this has been carried on for but long may it be continued. This photo is from last year. 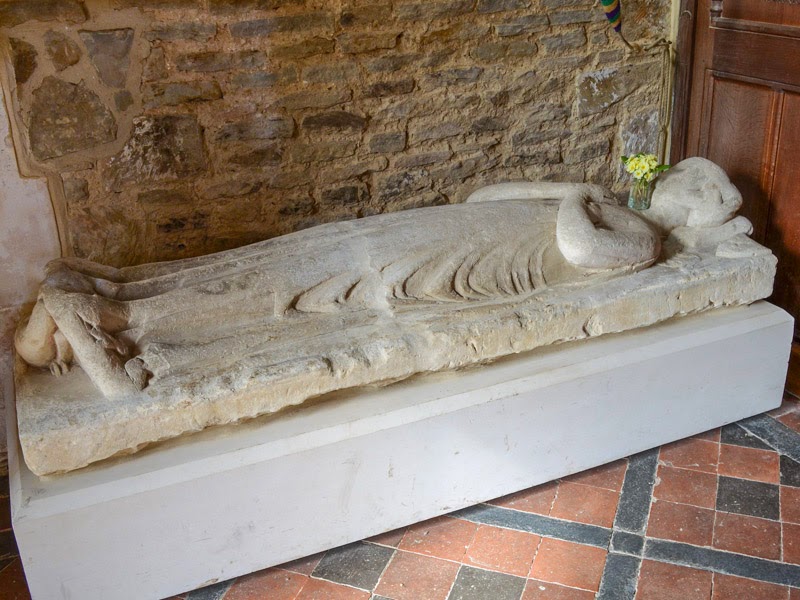 Arilx
P.S As a footnote I now know that it is believed that the Lady of Dedisham was a member of the Tregoz family.