By hook or by crook

I wrote a little about our walk on Devil's Dyke last week, but if you know me you know that that alone wouldn't have sated my curiosity.....as is to be expected I'd done my homework and popped another little treat [poor Mr GBT...he doesn't know how lucky he is being married to me!] in whilst we were in the area.

Pyecombe sits at the base of the South Downs on one of the ancient drover's tracks. The church is known locally as the Shepherd's Church. It has a rather fine and very rare 12th century lead font which supposedly was dunked in whitewash during the Civil War in 1645 to stop the Cromwellian rotters from melting it down and turning it into bullets! You can still see the white traces today. 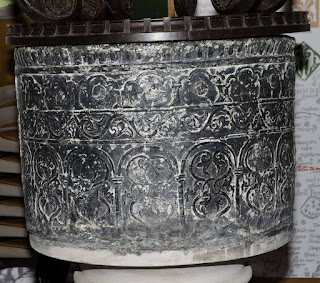 This type of gate is called a Tapsell gate and is peculiar to Sussex. It pivots to allow coffins through, but keep livestock out. I've seen one before, but never with a crook on the end..... 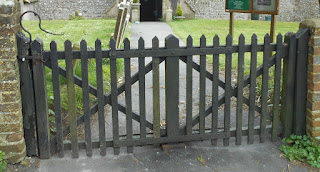 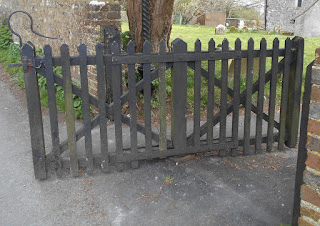 Ah but this isn't just any old shepherd's crook. This is the Pyecombe Crook which was deemed to be one of the best in the country by its users. It was made in the village for 200 years. It seemed rather appropriate to be seeing this in mid lambing season.

Earlier in the day we'd wandered around Saddlescombe Farm which is owned by the National Trust. Not having small people anymore I had forgotten about events such as "lambing" ones. It was a bit of shock to the system to be suddenly surrounded by lots of excited children queueing to feed the babies. Following the signs to the donkey wheel we soon left the thronging masses behind only to find that we couldn't actually get to our intended target as the gate had been shut off....for a very good reason though...tucked away quietly in front was the nursery field in front were the ewes with their still tottery new lambs who were struggling to coordinate their legs. Seriously high cute factor and a lovely surprise! 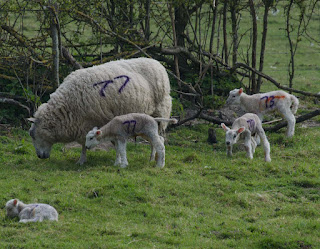