Well amazingly here we are again with a whole month gone and another blog post full of our personal thrifty doings. We were due to be away in Chester this week for a short break, but funnily enough that's not happening now. Thankfully we have been able to postpone or delay everything we had booked already so we haven't lost out financially. Usually we take our car to the Skoda garage to have its service done, but they are only doing specific jobs at the moment. Mr GBT contacted our local Halfords to see how the land lay with them instead....result...it's going in next week and we'll be paying £100 less!!

Beyond spending on food and utilities etc I haven't spent a bean. I'm usually pretty good at thinking my way round situations to source things cheaper or find other ways of achieving them, but at the moment we have accepted that we are paying more to use the milkman and the local shop for what we are buying, but we are not spending any more because we're planning so carefully and wasting nowt. Our weekly treat is some crisps that we can share and a bit of cider. I have been making sure that there is always some form of home made cake or biscuit available for lunch every day, but TYM pays for all the extra bits he likes from his uni loan and the bit of money he's getting when he does the takeaway deliveries. He told me last night how he really understands why we've always lived below our means to have money set aside for a rainy day as this is now our rainy day with me not working.

So what else have we been up to? The one thing I am getting low on is razor blades....I've extended the current one by clearing beneath the blades with a pin and have one more unused one to go. I've made the decision to buy a proper safety one with my Xmas money I still haven't spent once all this is over as, having done the sums, the outlay may be more initially but in the longrun it will save me money. In the meantime I am eyeing up TYM's old razor which he's long since abandoned as an interim measure. He's been bearded for ages and has a trimmer. He has no intention of going back to being clean shaven again as he looks like he did when he was 17!!

Mr GBT has been fixing things again. We've got one of those eco balls for the washing, but the seal is failing. Normally it has little brown and white balls inside and the first time it came undone my first reaction was how on earth had a load of maltesers had got in with the clothes...you can see how my brain is wired can't you! The second time it happened it wasn't so funny so he's wired it round to stop it spilling its guts again.

For one who's not known for wanting to spend a moment longer than she has to in the kitchen I actually haven't poisoned my chaps yet [not for want of trying😈] and have served up some half decent tasting meals [I'm not big on presentation!] Mr GBT cooks sometimes and then I clear the decks. We bought a chicken last week and divvied it up. Mr GBT took the legs off [we froze them and used them in a slow cooker recipe for Spanish chicken], roasted the main bird and now have the leftover cooked meat set aside for a pie. I decided to go for it and bunged the carcass along with some leek tops in the SC to make stock.  Looks a delicious shade of pond weed green doesn't it! 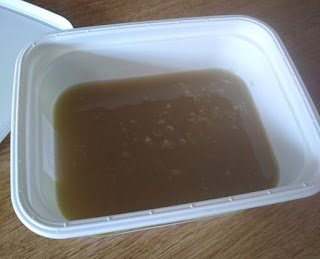 Without warning TYM I had it in the fridge door in an old milk container.....as usual sonshine was plugged into his phone and so poor old Mr GBT had this added to his tea that TYM made him instead! I have removed the offending item and stuck it in the freezer out of harm's way!!

Other foodie ideas this week have been stuffing burgers made with whatever was lurking in the packet together with a bit of cooked pork and chorizo that I rediscovered when I cleaned the freezer out. I've been catching up with "Daily Kitchen" too and was intrigued by Nadiya Hussain's recipe for "Baked Bean Felafels" https://thehappyfoodie.co.uk/recipes/nadiya-hussains-baked-bean-falafel Had I only seen this written down I'd have turned my nose up at it in all honesty, but am now all guns blazing and ready to have a go. I have neither chickpea flour so normal will have to suffice nor sriracha sauce, but I reckon I can wing it with the chilli sauce I do have. Top tip from Jack Monroe too about how much cheaper using a tin of rinsed off baked beans is over the normal tinned haricot beans.  For once I was quite proud of my culinary efforts on Sunday and took a photo to prove it. Making full use of the oven I'd just whipped out a batch of fork biscuits https://thehappyfoodie.co.uk/recipes/fork-biscuits [next time I shall be adding in a heap more stuff to flavour it with] and am just on the point of bunging in an apple crumble and cauliflower florets which I'd tossed in oil with a sprinkle of smoked paprika and seasoning. We ate half hot and had the other half mixed in with mayo, chilli powder, seasoning and a dash of lemon juice with our veggie chilli.

I wasted last week making something that I decided on Saturday just didn't feel right so I've undone my efforts. Instead I have started something new which is far more to my personal taste. I have taken this as a lesson in making sure that when I'm being creative I need to be true to myself and my heart needs to be in it. This little project requires some stuffing, so I have finally found a use for the two ex  unrecyclable pillows I had in the garage. The filling is perfect! If it all goes well hopefully I might have some photos to share of my handiwork!

Deep cleaning dark forgotten corners of GBT and reorganising/tidying still continues. In some ways I am pleased to find that it has generated very little in the way of rubbish or unwanted items. We have a lot less than many people, but still lack very little. One of my sorties unearthed this very pretty tablecloth and napkins that I'd bought back in the autumn for very little from a local charity shop. Originally the plan had been to cut it up and make it into a new bathroom blind [another as yet unstarted project!], but I've worked out another way of doing it so it's surplus to requirement. Have decided to press it into action and we're going to have a homemade savoury cream tea with my parents once we can meet up again further down the line. 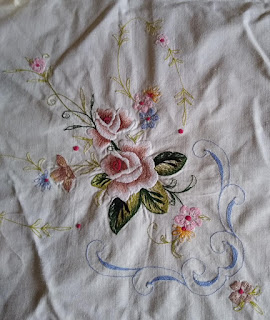 One much loathed chore is progressing well I am pleased to report...the cleaning and dusting of my dollshouse. It had got so bad that a real spider had moved into the kitchen...it was rather like being round at Miss Havisham's with the way it was all festooned with cobwebs! I'm doing one room at a time so will finish off with photos of my handiwork to date! It is far from complete, but looks better for having had the contents sorted out into some kind of order. 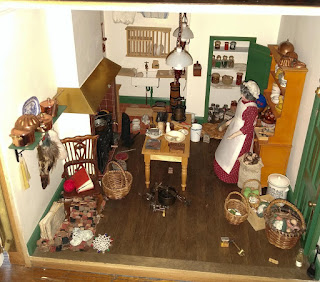 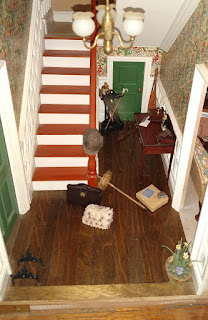 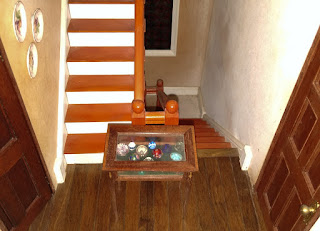 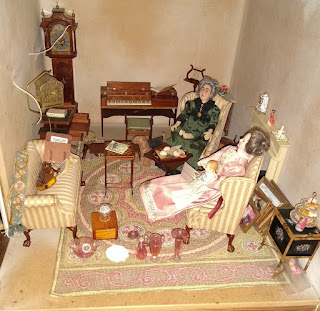 If you fancy doing some colouring with a difference there's oodles of free choice for you here https://library.nyam.org/colorourcollections/?fbclid=IwAR1Nnzx4evt3Q0RgScARRzHmSFOLuiSxY9SSpDABQi_Ihh7BfjDNOCVLtKU Enough of my wordy yappings!!