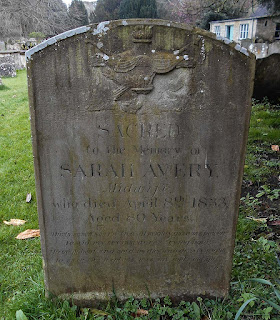 Sometimes when I go poking about I draw people's attention and curiosity gets the better of them. I can vouch that the volunteers who give their time to St Michael's in Cirencester are exceptionally friendly and most helpful. Having established that I was merely looking out for any unusual gravestones rather than one in particular a couple of chaps kindly pointed me in the direction of several stonkers. I had already found this one for myself. As gravestones go it's nothing out of the ordinary, but it's the epitaph which makes it stand out.
Sacred to the memory of Sarah Avery
Midwife
who died April 8th 1833
Aged 80 years.
Never before have I encountered a non modern example which refers to a woman's vocation. Whilst the ones for men laud their achievements and trumpet loudly about the professions and positions they held all I ever see for women is mention of their roles as Mother, wife, daughter, sister etc. I know that this is very much down to the class of women who could have afforded a headstone often not working, but it also springs from a time when a woman became the property of her husband upon marriage. Beyond the conventional descriptions you get very little sense of the individuality of females, so I was staggered to see that Sarah was a midwife. This led me to wonder why she was thus singled out like this, but frustratingly I can find no mention of her online to give me the background.
Well if I can't glean the information about Sarah it has whetted my appetite about what late 18th century/early 19th century midwives would have been doing at this time. The origins of the practice would most probably started by women in labour being attended by women who had been to other births and through experience had learnt their craft. It was a world very much secreted away from men and those fulfilling the role were often viewed with suspicion in a male dominated society. Further on down the line it became a way for women to earn money rather than being dependent upon a husband through marriage which would have been highly unusual for the time. By the time Sarah Avery was practising the whole business had been altered by a far more scientific and medical approach and there were now male midwives called accouchurs. With a better understanding of the human body from the advances in anatomy treatments had improved, but giving birth remained a very dangerous business both for the mothers and infants right up until the early part of the 20th century when key drugs came into play and mortality rates finally dropped. The situation was also greatly improved by the 1902 Midwives Act which ensured all midwives were registered, trained  and proven to be able to practise at a standardised level of medical competence.
You might be interested to know too that officially the first British woman to qualify as a physician and surgeon was Elizabeth Garrett. She was barred from the male only classes at the Middlesex Hospital, so in order to circumvent the system she took private tuition and passed her medical exams with the Society of Apothecaries in 1865 which named her as a doctor. And their enlightened response to this? To change their rules and prevent the situation from arising again. Thankfully Elizabeth was nothing if not determined and in 1872 she set up the New Hospital for Women. Her refusal to have her ambition thwarted eventually yielded results and by 1876 a new act allowed women to enter the medical professions. She wasn't the first trail blazer though to blast open the doors of this exclusively male world. Dr "James Barry" qualified as a doctor in 1812 and "he" served as a doctor and surgeon in the army for 46 years. It was only upon "his" death in 1865 that "he" was discovered to be Mary Ann Bulkey. Quite extraordinary but not the first time I have heard of this happening. Definitely a case of if you can't beat 'em join 'em. I have the Sick to Death museum in Chester to thank for the information about these two incredible women who paved the way for those who have followed on.
Arilx
at May 17, 2022