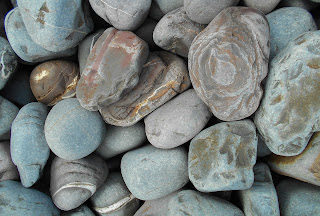 Recently Mr GBT and I attended a talk given by a local archaeologist in which he reviewed the findings in the district for 2017. There's a massive ongoing housing project here, so the archaeologists are called on site to record the area before everything is permanently erased. It had always been assumed that there was no Bronze or Iron Age occupation this far inland [evidence points to the dwellings being on the coast], but we now know this not to be the case as post holes and circular features indicating roundhouses have shown up. People have been living and farming here for millennia.

At the end the chap who'd overseen the project asked if we had any questions. I asked him simply what he considered personally to be the best find [the soil conditions are not good for preservation here]. After a moment's consideration he replied it was a stone he'd found in the spoil. It was shiny and at first he'd thought it was just a bit of broken glass. He showed it to the on site specialist who told him that it was a worked Paleolithic stone, but showed further Bronze Age workings on one side which had altered its shape yet again. He himself had found it in the Iron Age ditch and he said  the idea that a small number of people had been attracted to this one stone and then lost it, only for it to be refound later and treasured once again with that connection right back to our ancestors he found just incredible.

This exchange has put me in mind of the latest Reading Club book I've just completed. 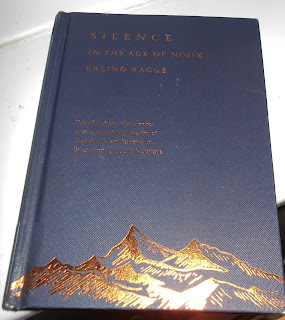 It's a non fiction book [very short] about the author's search for inner silence in our noisy and distracting world. With a very simple format of short chapters and an easy, accessible style of writing, Erling Kagge is able to explain his ideas is a light, but informative way and it certainly gave me lots of food for thought. Having learnt about the dopamine loop I now understand why I lose so much time pointlessly twonking about on the internet if I'm not mindful of my usage. For that reason alone I've now removed Yahoo from my phone [Facebook and Messenger were taken off on an earlier cull]. I enjoyed the book and the varied anecdotes he told by way of illustration, but the one which springs to mind is the reaction of the Americans who had been holed up and isolated at their base at the South Pole for months. One Christmas somebody smuggled stones in for everybody...when you have been surrounded by ice and snow for anything up to a year and been denied the sight of something so mundane and everyday as a stone the childlike wonder of something so "simple" is reignited. I borrowed my copy from the library, but it really is worth a read if this kind of genre is your thing.

For me realising just the sheer breadth of colours and variation of shape of the stones on Clovelly beach last summer was enough for me to stop and take the photo at the top. I didn't bring one home as I reckoned the memory would be enough. People have clearly been doing this very same thing with stones over a very long time!