No word of a lie.....I stood in front of this postbox a few weeks back and seriously wondered why the cipher on this postbox read Elizabeth VII! In my defence I was still very woolly headed and unwell, but really?! 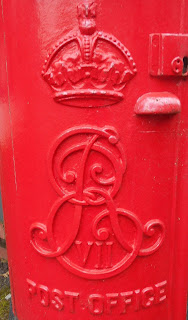 Once the fog had cleared and the farthing had dropped I registered that it was, of course, an Edwardian one....I know I "saw" one once but only because it was pointed out to me. I don't know if others are like me, but hand on heart I can honestly say that I only pay any attention when I'm looking for one if I've got a letter to post!

This little revelation has piqued my interest so I've had a closer look at some of the boxes [there are numerous designs nationally] on my patch when passing. It's been a revelation to find that Horsham has the whole set bar the very and frankly unsurprisingly rare Edward VIII one [although it's very possible there might be one but I'm not so obsessive to be bothered to go looking specially. If you haven't nodded off yet here they are for your delectation!

The oldest box still in use is on Guernsey [1852] and the first ones on the mainland were seen in London shortly after in 1855. Originally they could be any colour, but then a standard bronze green colour was introduced in 1859. The intention was that they shouldn't be garish and stand out...the plan worked so well that people kept bumping into them, so red it was from 1874. For those with a burning desire to know more may I signpost you to The Letter Box Study Group http://lbsg.org/ There always seems to be a group dedicated to any interest no matter how niche it is doesn't there!