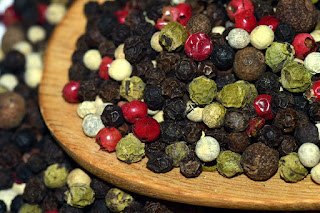 I suspect I might be a bit of a nightmare when I'm out with friends and loved ones...I'm that person who always stops to read notices or further investigate anything which catches my eye....if it proves its worth then I'll go even further and take a photo. Some of my best finds have come to me this way....further investigations when I'm back at GBT have led me down all sorts of unexpected avenues and provided me with all sorts of stories.

It's from this habit I learnt last summer that at one time dockers had their pockets sewn up to stop them from helping themselves to peppercorns when unloading the boats. It seems incredible that something we consider so everyday now could at one time have been so expensive. With that little nugget it would be a shame not to dig a little deeper and share a little more about these shrivelled little berries.

Pepper and the trading of it has been with us for a long time. It's been used in cooking for more than 7000 years and when the Visigoths sacked Rome back in the day they not only demanded gold and silver in ransom, but a further 3000lb of black peppercorns. In the Middle Ages a man's wealth was measured by his stockpile of pepper....incredibly it was worth more than silver in weight! It remains the most traded spice with Vietnam being the biggest producer.

It would seem it's a highly versatile product which has seen it being put to use in many different ways during history. Ramesses II had peppercorns inserted into his nostrils as part of his mummification. Here's a small selection of some of the other things you might like to try....

A teaspoon of ground black pepper added to your laundry stops colours from bleeding and fading when you wash them.

Put pepper round your plants to stop pests.

It has many health benefits including being an aid alleviating tooth ache and indigestion.

Being a simple soul I just use it in cooking. My absolute favourite is grinding black pepper over fresh pineapple [others swear by strawberries]. Take it from me it's delicious!