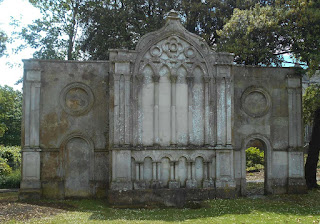 This edifice hides behind Christchurch Priory in Dorset. Initially I only saw the back of it, but nipped down to take a further look at it. One photo later I was none the wiser as to what it was and thought perhaps it was something to do with a war memorial as it's in the garden of remembrance. The true story it transpires is so much more interesting....

Mrs Perkins died aged 47 on 16th June 1783 and this was her mausoleum. Nothing unusual in that you might say.  Mrs Perkins was a lady though who harboured a great fear of being buried alive and went to great lengths to prevent this from happening. Before her demise she stipulated the following-

-She must be buried above ground in a suitable structure and within earshot of the entrance of the Free School. The logic was that if she was indeed still alive and trapped the boys would be able to hear her hollering and release her.

-The mausoleum lock should be constructed so that if need be she could open it from the inside and return to the living world.

All her demands were met, but she was re interred in the  family vault in nearby Winkton in 1803 following the death of her husband. I am guessing that after a period of some 20 years people could be fairly sure that she really had turned up her toes!

We stopped for lunch in Christchurch on our outward journey to Somerset. More photos tomorrow.