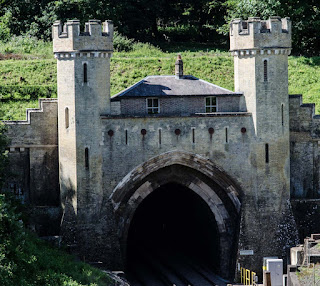 An image of the Clayton Tunnel in West Sussex brings a whole new meaning to the phrase "tunnel vision". Taking three years to build it was completed in 1841 and is a marvellous example of Victorian fancy. Every railway tunnel surely needs its own castellated towers and arrow slits. The suggestion has been made that perhaps rather than just being viewed as a piece of whimsy perhaps the intention behind it was to appease some of the major landowners in the area. Whatever the intention behind it it remains a mighty fine piece of engineering and building!

Hope you all have a cracking weekend.