One of those glorious moments at Clapham Junction when the train is late and the wires have got crossed between the driver and the station. The information board said the first stop would be Surbiton....as soon as the doors had slammed shut the information on the train said first stop would be Woking. Umm...ah well get off at Woking and go back up the line. Just as well I'm an old bird who likes to be punctual and always leaves herself a big old chunk of spare time [anxiety does have its pluses]. Besides had I not had my unexpected little travel add on I'd never have seen this sculpure "Seated Man" by Sean Henry on the platform. I really rather like it. 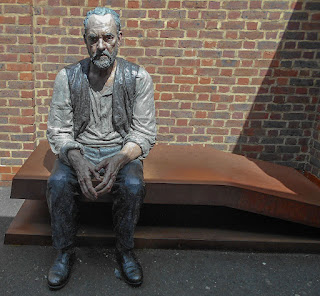