One of those scribblings in which I put loosely related snippets, none of which are sufficient to merit a postlet in their own right about my funny little thrifty/greenish lifestyle we enjoy here at GBT. 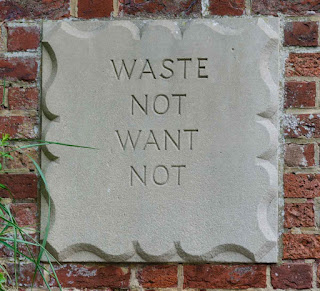 The buttons from four very worn out [they were from the charity shop/jumble sale originally] from Mr GBT's shirts have been saved and I've cut one of the offending articles into kitchen mop up cloths which are under the sink. They will be used for spillages and should see our much reduced use of kitchen paper brought down even lower [it goes up when TYM is home]. The others have gone in the recycling bag and I've bought him two replacements again from the charity shops.

The new reading club was fab. I found the first book very thought provoking, but it's not one I would reread. My copy came from the second hand marketplace on Amazon and has now been passed on, but for the next one I've ordered it in from the library as I've got time to wait and that's what I intend to do for future meetings where possible. 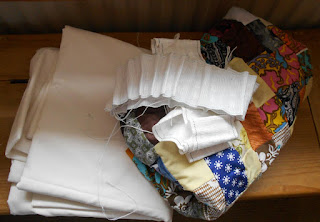 Kitchen curtains ah yes...progress has been made. A thrifted duvet cover has been cut up for the lining and I've raided my stash for the header tape which I took off other pairs. Unfortunately I've hit a temporary snag as the patchwork fabric my friend gave me [her MIL who made it had died and it was going to be thrown out] is not quite wide enough so I'll need to source a plain fabric to make a border...am hoping to find something suitable via my normal preloved routes.

On the food front two new veggie recipes have been tried...both passed the easy/cheap/quick/tasty rigorous testing they were subjected to. Details here if you're tempted. Refried bean quesadillas https://www.bbcgoodfood.com/recipes/725645/refried-bean-quesadillas and spiced swede fritters https://www.bbcgoodfood.com/recipes/1974638/spiced-swede-fritters. The odd half swede this left me with went in with the leftover potatoes to make mash for our Shepherd's Pie.

Make do and mend...sometimes I'm glad I'm a bit of a saver of Very Useful Things [only in a very tidy and ordered way though...deffo not a hoarder]. I lost the screw from my glasses, but because I'd kept the identical pair [BOGOF deal years ago] I simply pinched one from them [can't wear them now] and fixed them at home. Mr GBT has been busy with the packet of Sugru that I invested in too. We had several plastic things which had broken and had failed to fix with other types of glue. 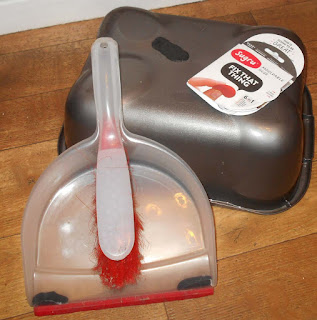 As you can see, Kintsugi it ain't...if you're after a pretty mend this is not for you. However, it has fixed lots of bits for us. I thought the product was rather on the pricier side and it only keeps for six months, so if you are going to try it make sure you've identified lots of things to mend before you part with your hard earned dosh!

Work on the veg plots has officially begun👍 Not by me I hasten to add. Dear old Mr GBT has been and emptied the compost heap...is it only me who stands back in wonder at the alchemy of it all? You put in all those unusable scraps and then months later they're transformed into buckets of friable soil. It's like magic! The beds he built last year have been topped up and the shallot sets he bought recently are now planted out. I've recently discovered this blog from which I'm learning a whole new way of looking at ways of using up stuff in the garden....the writer is a permaculture teacher, but she's also keen on sustainability and the circular economy. All areas of personal interest to me https://thesnailofhappiness.com/author/thesnailofhappiness/

My plans for the garden include a rewilding project...I have bought a locally made bug hotel from the nature reserve [position in garden yet to be decided] and invested in a bag of dried meal worms. We don't get many birds on our feeders, but there is a very keen robin [or two] and I'm hoping there might be other avian visitors which I simply miss because I'm not here much. I shall persist...bee friendly plants are part of the plan, but not until we are past the frosts.

As ever I keep tweaking how we do things here in my bid to tread more lightly on the planet. I've just swapped from green pan scourers to the recycled steel ones. I "think" they're a better option, but since then I've discovered you can use loofahs and they can then be composted once finished with. I used the Ecover refilling station for the first time at the Repair Cafe which generates less plastic recycling because you take your own bottles and next on the hit list is moving back to loose tea once my current lot of teabags have been finished so that I can further reduce my plastic impact.

I've never been one to just trade up for the sake of having something new and shiny....let me finish by showing you my cooker....strange thing to share you might think....this old lady has a birthday to celebrate because she's thirty now! I bought her second hand in 1990 from the chap I got my first flat from and he'd had her since 1988 [don't think she'd seen much use to be frank]. I paid my oven cleaning chap last week to do his annual spruce up and she's come up looking rather fine I think. This time I've put foil on the bottom of the oven aswell as under the rings to try and keep her as clean as possible. Although I am not a great lover of cooking, she has given us the most fantastic service! 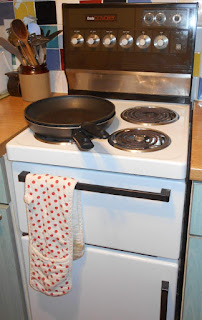 My sincere apologies...I thought this was going to be a short post...it has turned out anything but. If I haven't bored you all to tears please do swing by another day!