On the Green Circle

Following on from yesterday's post a new public sculpture trail on the Green Circle was opened in October....naturally being a curious old bird I felt it my civic duty to go and have a snout!

This zinc and steel creation is more interesting than it perhaps looks at first glance.It represents a railway signalman's lever and an interlocking between points and signals which was invented and patented by a local man, John Saxby. He was motivated to do so following two tragic crashes caused by signal failure on the London to Brighton Line [Burgess Hill is one of the stations] in the 1850s. It's the work of Jon Mills. 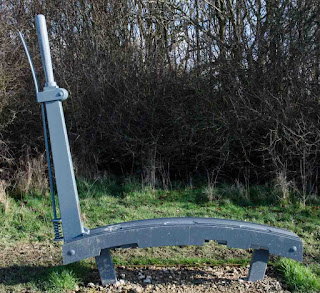 A length of film made from a porcelain mosaic represents the life of John Bee-Mason and an incredible life it was too. He was an early leader in the field of filming nature as well as a war photographer. In the 1940s he developed a cure for rheumatism for which the sufferer had to be stung on the arm by a bee and he was an advocate of the curative power of honey. If ever a chap was suited to his name!...I "think" the mason bee is one of the solitary ones. The artist behind this one is Alan Potter.

Emily Temple...a very successful artist and wax flower maker from the town. She bought properties, paid for the building of the church and bequeathed the land which is now the main park. There was something very beautiful about how the artist, Helena Roden, had managed to create something so ethereal yet so robust from steel and resin. With the sunlight shining through the cutaways on the skirt there were some lovely shadows cast. 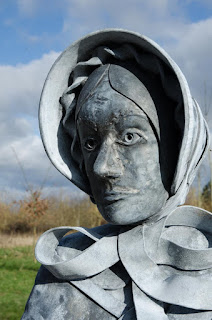 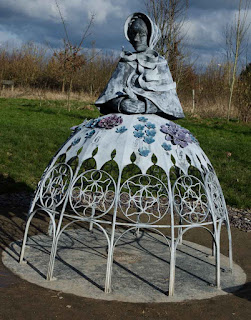 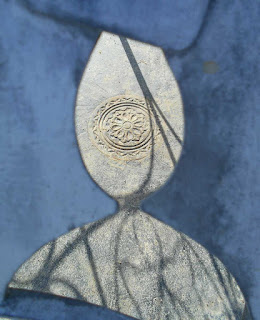 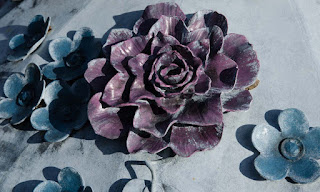 Prior to finding it I knew that the title of the next piece was "Bluebird Contained". Frankly I didn't know what to expect, but it certainly wasn't this. It transpires that a local engineering company, Norris Bros, created Bluebird 7 and then later the Bluebird car which took the land speed record in 1964. Steve Geliot looked to their revolutionary honeycomb design for the inspiration behind his stainless steel masterpiece. 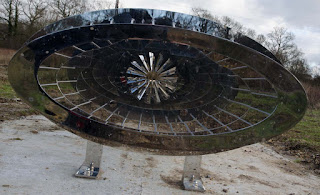 Of course, as tradition dictates I've left the best....well my best to last. I'm sure others might think differently. The two "Flow of Life" boundary markers which reference the amazing plant and wildlife of the immediate environment. They are carved from green oak by Janine Creaye. It's not the first time I've admired her work. Looking back through the archives it transpires that I went to one of her exhibitions at our museum a couple of years ago https://gnatbottomedtowers.blogspot.co.uk/2016/01/getting-ahead.html
Here they are in all their glory. I couldn't resist the dormouse! 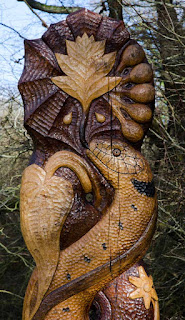 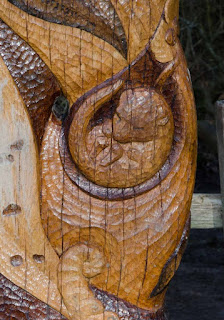