Farley Mount is the highest point in Hampshire. Now I would have sworn that it was within walking distance of my student digs as I have definitely been there. However, the old memory is a little faulty after 30+ years and that particular hill was St Catherine's which I've also climbed. I'm intrigued how I got there now...maybe flying carpet. Somebody must have had a set of wheels as it's a few miles out. What I did recall accurately was the folly on the top and some vague recollection of it being linked to a horse in some way. 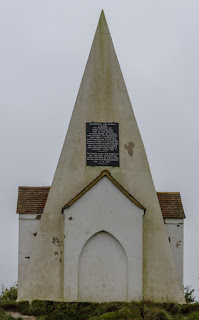 There is an equine connection for there's a horse called "Beware Chalk Pit" buried beneath the building. It was owned by the 3rd Earl of Bolingbroke. Whilst out foxhunting in 1733 it leapt into a chalk pit with its owner on its back and thankfully lived to tell the tale. A year later it rode to victory in the Hunter's Plate in Worthy Downs. Such was his delight the Earl had this memorial built as a permanent reminder.

We popped in on our way home and just managed to flit in and out between the showers..