Late to the party.

As far as I am aware I have never managed to be on trend in any part or at any stage of my life. What's fashionable tends to pass me by or even if I do catch wind of something that everybody's talking about chances are that I shall ignore it on principle. Perhaps it's a principle that means I'm cutting off my nose to spite my face but knickers to it all. I am after all the dame who only discovered that the acronym G.O.T stood for Game of Thrones last summer! As you might imagine I have never read the books nor have I seen the TV series. That's not to say I will never...I'll just wait until the fuss has died down and people have moved on to the next new thing.

Actually I'm not sure that this approach is necessarily such a bad thing for it means I'm constantly making accidental new-to-me discoveries in the way of books and films. At the beginning of the year I parted with ooh about 20 pennies and bought a handful of those freebie DVDs that used to be given away with the weekend papers [I was helping out at a jumble sale]. These are rather marvellous to watch when I am rooted to the spot ironing on a Sunday morning and has meant that I have recently thoroughly enjoyed discovering the quirky and poignant "East is East" and "The Baghdad Cafe" . These, I find, are very much in keeping with my taste in film genre...other favourites which spring to mind are Ferris Bueller's Day Off, Fried Green Tomatoes At The Whistlestop Cafe, How To Make An American Quilt and "I Capture The Castle". Any other suggestions of titles of a similar ilk are gratefully received.

Mr GBT and I finally caught up with "The Theory of Everything." It was as fantastic as the hype promised and of particular interest to husband as he saw Stephen Hawking on one occasion when he was studying Physics at Cambridge. I know it's already out on DVD but we saw it in a local village hall. I am unlikely to watch it again so the disk wasn't necessary and this way the money we paid for the ticket helps a charity rather than some huge overpriced cinema chain that fleece you. We enjoyed the experience so much that we're off to see Paddington this month!! 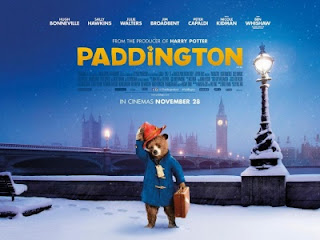