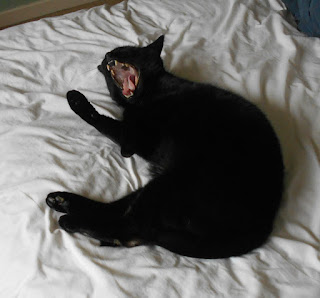 Samantha the Panther [aka Humphrey] briefly considered doing a little something extra beyond breathing on Wednesday. Having thought about it he quickly reached the conclusion that he was still suffering from the strain of the momentum of his rather portly tummy slapping against his front legs as he rushed down the stairs for tea so a mighty yawn it was and a speedy return to his normal state of complete suspended animation.

Seriously though he's getting along rather well. He's a gorgeously straightforward chap who is tremendously affectionate towards us. He is still however, very wary of anybody else and tends to hare off at the first opportunity. He remains resolutely stout and always in the market for a snack. I'm not so keen on his penchant for live mice. He let the last one go in our front room but I think he must have caught it later on as three weeks down the line I can't smell anything thank goodness. Yes definitely an all round good egg!