Getting the chimney swept.

If you live in an older property and are expecting a rather plump fellow in a red jacket to climb down it later in the month, you might just want to get it swept before the big day. 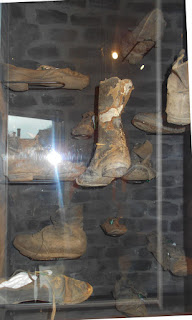 A row of three cottages in East Sussex were found to be hiding a huge cache of worn out boots and shoes in and around the chimney space. It seems that at one time [if Wikipedia is to be believed!] witches were drawn to the human scent of the footwear and once they'd had a nose they'd be trapped inside the boots with no means of escape forever more. The practice died out in the nineteenth century. [seen at the Weald and Downland Museum]