We went to Chester in the early part of the year last time....if I say Beast of the East it might ring a few bells [yes that was us travelling back down the country on that very day!]. It was bitterly cold the whole time we were there and indoor activities were the order of the day. On this occasion the weather played ball....warm and sunny. Suddenly those city walls looked so much more inviting. They formed the basis of a walk we'd planned which took in all the bits and bobs I wanted to take a look at...so on and off we hopped as we investigated the following...

The town hall clock. It has clock faces on only three of the four sides. The side that is facing Wales is blank. Supposedly this is because Chester won't give Wales the time of day, but this is only a rumour not fact! 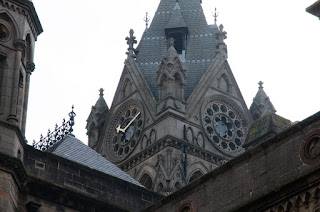 As it's free entry it would have been a shame not to have stuck our noses in at the cathedral again. Every time I go I see more wonders. This time there seemed to be a plethora of carved figures either munching on each other or themselves. As it always does Greenman neck got me again so I couldn't look for long as it quickly became too painful. This one was rather dramatic! 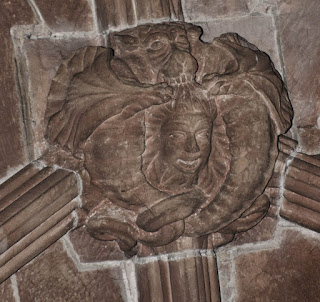 Looking down on the Roman Garden from the wall. This is where all the different bits of Roman masonry have been put together as they've been discovered. Just across the road sits the Roman amphitheatre. It's a grade one listed building and is the biggest in Great Britain. 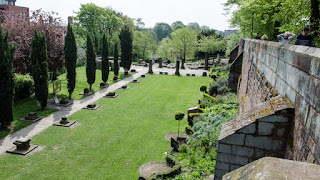 Time to move forward a few centuries with the next one. The church of St John the Baptist holds a few surprises, the first being that it's set within the ruins of parts of a bigger incarnation. If you look high up on the ruin wall you can see this unusual medieval coffin. It's hewn from a whole block of oak and is an unusual survival. It was found by the sexton when he was digging a grave in a disused part of the churchyard in the 1840s. Originally it was put on show in the church, but later on the vicar had it moved to its current position. The words are Victorian.

We met this fellow in the porch. He's called Fred and is a freeman and guildsman of Chester. Being part of the Morris world I've encountered my fair share of giants in my time so wasn't phased by the size of him. Even more to my taste inside was a "pile of old stones" as my son would disparagingly call them. Bases of Saxon crosses and this rather fine 15th century graveslab from a blacksmith. The carved tools rather give it away. 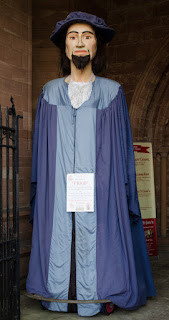 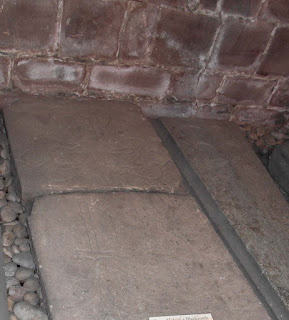 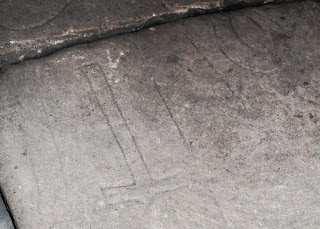 Speaking of TYM...look who put in an appearance. Nothing to do with the free lunch his parents were treating him to you understand! Mr GBT has to sneak photos of me because I'm fairly camera shy. 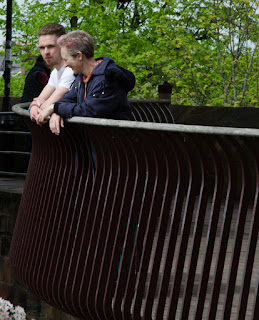 Replete once again we took in the delights of Grosvenor Park and Billy Hobby's well. The Victorian building covers a natural spring and legend has it that in days of old the Chester ladies would immerse their right legs in the water in a bid to increase their chances of finding a husband. Sadly now it's closed off and is rather forlorn looking. 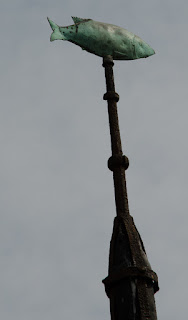 With a final trek out to the Roman Minerva shrine in Edgar's field and having got a fair few miles under our belt it was time to retire with a hefty and well deserved icecream! 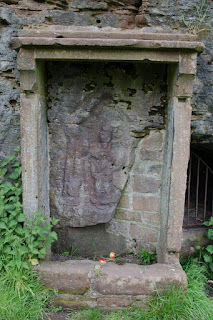