After a madly fabulous weekend of dancing my legs are letting me know today that they've had quite enough exercise for now thank you.

Going back to the Tewkesbury Medieval Festival after a three year hiatus [Mythago has still been there every year] has been a personal revelation. On the previous occasions my anxiety played havoc with my pre performance nerves and I swore I would never do it again. However, these days I simply don't get stressed if I make a mistake here or there and a small frisson of adrenaline is to be expected, so we have already booked the hotel for next year!

Wherever possible I tried to get a little taste of what was happening between our sets, but photos were few and far between. However, I did manage to snatch a couple of this rather magnificent beast who I glimpsed in the distance when we were lining up for the parade yesterday. I rushed back to photograph it later on when it came to a stop at the showground. The dragon is a new addition this year and is the work of an artist called Matthew King. 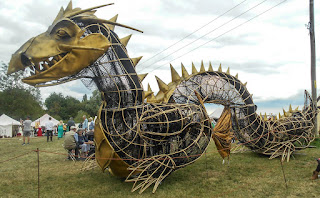 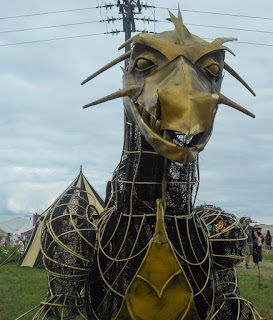