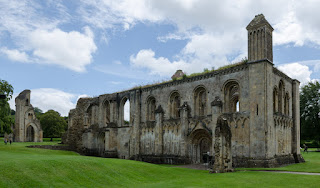 Little Jack Horner
Sat in the corner
Eating a Christmas pie.
He put in his thumb
And pulled out a.....

Not unreasonably you would expect the next word to be "plum"...however, if the inspiration behind the nursery rhyme is credible, then it would actually be the deeds to twelve manors. Little Jack is supposedly one Thomas Horner who was the steward to the last Abbot of Glastonbury, Richard Whiting. The abbot is said to have sent his steward with the pie to London as a gift to the King at the time of the dissolution. En route Horner did stick his thumb in the pie and extracted the deeds to Mells Manor. He took up the mantle of turncoat with aplomb by being one of the jurors who condemned his former boss to death. Perhaps it will then come as no surprise to find Horner then took up residence in Mells Manor..I smell the whiff of some shady goings on!