Some people have wish lists they have created on Amazon. I have one too [not on Amazon], but mine is rather different. Instead in my head I have a handful of birds I have seen, but would like Mr GBT to be able to get a photo of [my camera is not sophisticated enough] which prove a devil to capture. Over the lifetime of this blog my list has gradually dwindled as we've been able to cross off wrens, coaltits, greater spotted woodpeckers [green ones are very elusive], gold finches and most recently the skylark. The jay continues to taunt me....whenever we see one we are never prepared even when the cheeky beggar landed briefly on our bird table recently. I am confident that my time will come though!

Whilst nosing around Glastonbury Abbey I stood in awe at the swallows swooping and diving after insects on the lawns behind. "That's one we're definitely never going to be able to take off the list" I muttered to Mr GBT. Thankfully the old universe knows a thing or two about putting this moaning minnie in her place. Ta-dah! 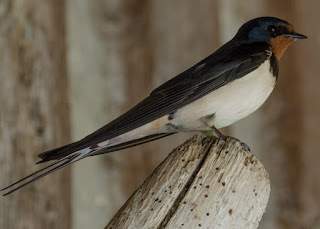 We were standing in a barn in Smallhythe on Saturday when we looked up to see this one just above our heads. There was a nest up in the eaves and one of the fledglings sitting tight upon one of the rafters in the corner. This adult bird swooped in several times and landed on this perch or next to the fledgling in a bid to get it to venture out. It was mid sulk and having none of it! I've never been able to observe one at such close quarters before.