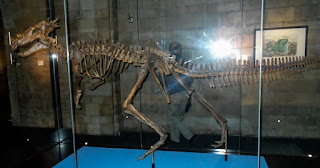 This dinosaur skeleton cast is at the Natural History Museum. It was found in Hell Creek, South Dakota in 2004 and research upon the bones revealed it to be a new discovery. It is its flat headed skull with the combination of bony knobs and spikes that have got the experts all hot under the collar and its resemblance to mythical dragons has not gone unnoticed....in celebration of this it has now been named "Dacorex Hogwartsia"! [nb this one is real!] If you fancy viewing more highly unusual skeletons then this site might be the place for you....http://www.merrylinmuseum.com/ Sorry to spoil the illusion, but it is actually an art installation [not open to the public] by Alex CF, but there were those who believed it to be true when it was launched.
Have a great weekend.
Arilx
at November 19, 2021