I've pondered these past couple of days about how best to blog about the Grant Museum of Zoology that I popped into with Lovely Grey last Saturday. In the end I've just decided to dive in head first....if the subject matter is zoology then it's never going to be pretty things in those specimen jars is it! Robert Grant set the museum up in 1827 as a teaching/educational aid for UCL. Its establishment meant that the university was the first one in the country to teach evolution.

I think three photos should suffice to give you an idea of what was in all those showcases. It's most known for this jar of moles....precisely why I can't fathom. The others are a fuzzy shot of a sample of 12000 year old mammoth hair and the skeleton of a large flying fox. 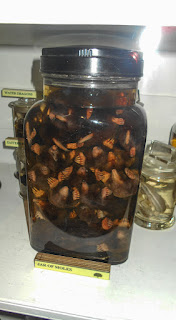 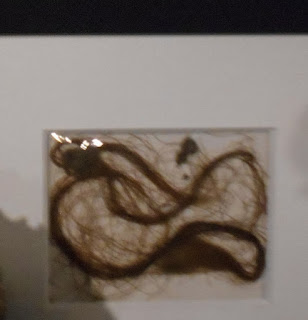 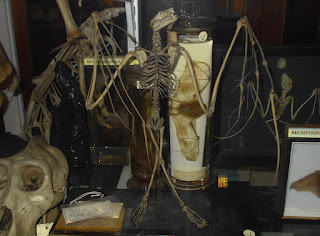 I'm sure that some people seeing these will loathe them, but I have always had a strange fascination with anything like this....at a young age I was taken to Walter Potter's Museum of Curiosities which was filled with scenes that Potter had set up using animals that he had taxidermied and then dressed  up https://www.amusingplanet.com/2011/12/walter-potter-museum-of-curiosities.html Although later on the museum closed and the collection was broken up, I can still remember it clearly. Likewise my science lessons were spent with a dissected rat in a piece of perspex propped on the end of our bench.  As with many things in life, I have reached the conclusion that we are a mass of contradictions when it comes to this sort of thing....many of us will happily visit stately homes  with animal heads mounted on walls or view stuffed birds behind glass without giving it a second thought. Perhaps it's just what we're accustomed to. However, I know that I'm not the only one judging by the number of other people there too!
No doubt Lovely Grey and I will manage to find something else out of the ordinary to see next time we meet!
Arilx