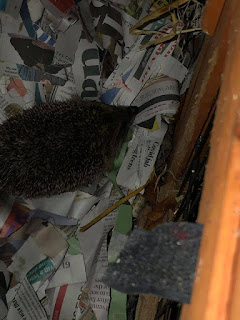 It's been a bit of a prickly week here at GBT. Last Wednesday afternoon we spotted a small hedgehog snuffling about eating bits of leftover birdfood. We were initially unsure what to do, but I understand it's never good to see these nocturnal mammals out in the daylight as it means something is wrong. We're coming up to hibernation season and they need to reach 600g to survive. Hedgehogs are terrors for having another batch of babies in the late autumn then evicting them once they've been weaned. I guess its Nature's way of survival of the fittest and some getting through if we have a mild winter. After a chat to our local vet they said to catch it and bring it in. They would then check it over and pass it onto the local wildlife rescue place they use.
By chance Wednesday night we had Mythago and I was chatting to one of my dancing friends about our hog as I know she has hedgehog houses and a lovely wildlife garden out in the country near here. What I didn't know was that she's a registered hedgehog carer and a wildlife release site for another local rescue hospital. She's very experienced and said to contact her if it happened again.
Friday afternoon and Mr GBT rang me to say we had an even smaller baby in our garden. It was only 180g and would never make it without intervention. This time we knew exactly what to do....within half an hour L had got her hedgehog hutch ready and we rolled up with our little spiny charge in a shoe box. I was worried that it might not still be alive, but she peeked in and it was still very much with us. After we left she took it along to her local vet to have a tick removed and since then it's been very lively. As soon as it got back it stuck its nose in its food and has been pretty much stuffing its face ever since. Honestly I'm like a first time parent again, but am pleased to report that it's now sleeping during the day and then waking up for its tea at nighttime. We can but keep our fingers crossed for young Cecil as L's named him [or maybe Cecilia!]
Arilx
PS Since I wrote the post I have learnt that we have a little girl so she's now called Celia. L has checked with the wildlife hospital and because she's too little to keep herself warm she's now been transferred to them to be kept in an incubator for now. She's doing well and L has requested that she have her back again so that she can release her back into the wild next year when she's ready. I have used L's picture with her permission.
at November 08, 2021