A Sting In The Tale

Well more than one sting actually....if one chooses to go on a nettles course it is to be expected surely. I have always been of the belief that we underrate nettles and we shouldn't. Having enjoyed them in soup for many years and knowing what a boon they are for butterflies, I can now officially confirm they are a bleeding marvel.

The course "Sting to String" was run by Dr Cathy Flower-Bond at the Weald and Downland and she was, as ever, a fount of knowledge and highly entertaining. During the day we had a go at using nettles in a number of ways including making string [think sisal], dyeing [they start off giving a yellow colour earlier in the season which becomes greener later on], concocting salves and eating them for our lunch [yes that good old soup standby again]. Cathy showed us samples of fabric that have been made from them and I kid you not a silken thread obtained from carding the inner fibres and then spinning them.

Obviously I don't want to give too much away about the content of the day but I'll leave you with a couple of titbits to finish.

-The Romans rubbed nettles onto their skin to bring the blood to the surface and start the healing process when they were wounded.

- Medieval Headdresses known as Hennins were made from fabric using a nettle mix. This was because they held their stiff shape much better than other available options and there was no need for the metal supporting frame. Obviously much lighter for the wearer.

-During the Great War the Women's Institute was involved in the growing of nettles. Iodine was extracted from the plant and used for treating the injured.

No photos of the event so I'll leave you with the piglets which had just emerged after their afternoon nap and were playing tag. 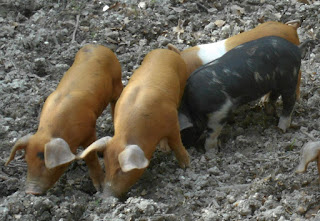