Three adults that is...yes amazingly, despite my somewhat haphazard parenting skills, we've all made it to our son's 18th birthday in approximately one piece. Champagne breakfast, lunch with our family and then he's out on the lash with his mates....I'll pass on the last one thanks.

Mocha cake for him...I offered to get one made for him but he went all coy and said he preferred the taste of homemade! There won't be much in the way of presents to open as the mad boy has decided he would like to throw himself out of a plane at 10000 feet [as if a bungee jump wasn't enough already this year]. We have bought him a voucher but have banned him from doing any such thing until his A level results are in! 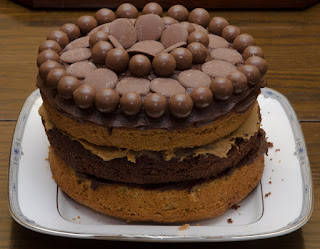