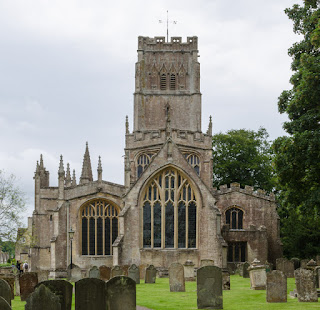 This is the cathedral of the Cotswolds. SS Peter and Paul in Northleach, Glos. A small little place I am sure you would agree....in fact it started out as a very modest size, but the wool trade made many merchants extremely wealthy and they stumped up for a bleedin' great extension which has made it the behemoth it is today. One such chap John Fortey bequeathed the not so inconsiderable sum of £300 in his will in 1458. I don't know what that it would be worth in today's groats but a fair whack I would imagine.

The same Mr Fortey forms one of the cast of characters which make up the impressive set of brasses within the church. These are not your usual set of knights and priests, but the local civilian woolmerchants, tailors and mercers. I was delighted to see the detailed clothing on the depictions. Indeed here is Mr JF himelf- if you squint carefully you can just about make out that he's standing on a woolsack. 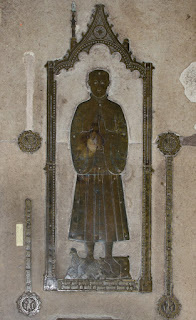 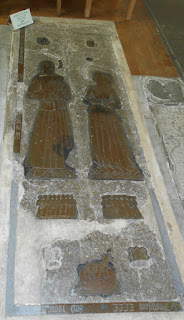 And Agnes with her two husbands. 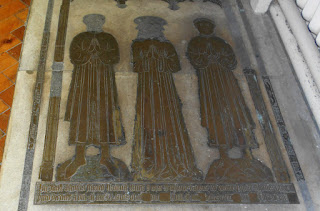 There is much else of interest within the building. There are some rather weather worn foliate heads dotted around together with the figures from yesterday's post. The font has angels playing early instruments with naughty devils below being crushed by the power of Christianity and I enjoyed encountering my first ever double squint. 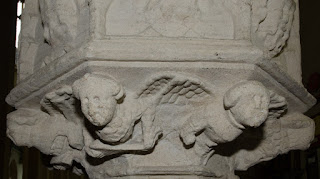 So there you have it.....pitstop report completed and submitted for approval!