The Right To Vote

No nothing specifically topical about the events unfolding at the moment! 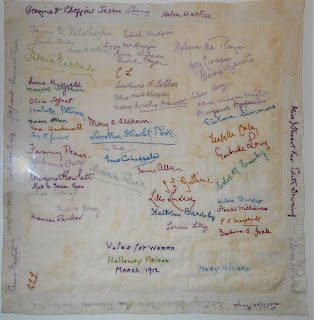 This is a handkerchief signed by the women from the Women's Social and Political Union after they had been arrested and sent to Holloway prison following the mass demonstrations in London in March 1912. This piece of important social history was rescued from a jumble sale in the 1960s. It saddened me that such a relatively low percentage of the young people [18-24] bothered to vote recently. Women fought hard to gain this right and we should be thankful that the efforts of those who have gone before us have given us democracy. Many parts of the world still don't share in this freedom.