Once again as part of my time away, I was lucky enough to be able to be a part of the annual Tewkesbury Medieval Festival. If you're ever up in that neck of the woods it's well worth going to as it's free and really is a spectacle.

Last year the organising committee set up a parade that went through the town on the Sunday morning. The whole community got involved and it was a tremendous success. Based on this it returned bigger and bolder in 2016, as I hope these few shots of the day will attest. A fantastic atmosphere with everyone pitching in and a great way to re energise the event on the Sunday when all of us are a tad weary from the shenanigans of the day before [note I am not admitting that the possible imbibing of alcohol the night before might be a contributory factor. I am however, willing to own up to sampling my first ever pink gin!] 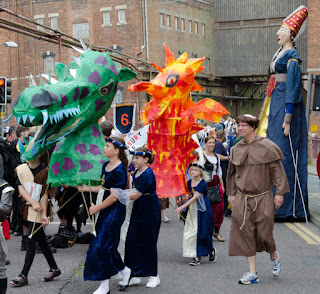 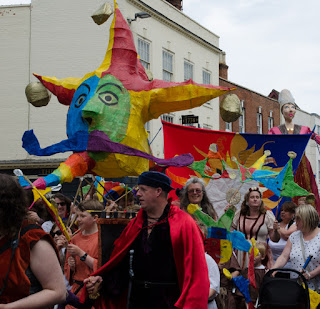 This is the plague doctor I do believe. They also had a black rat and the children dressed in bloody bandages!

Then there was this cast of characters....life is certainly never boring when you go to these events! 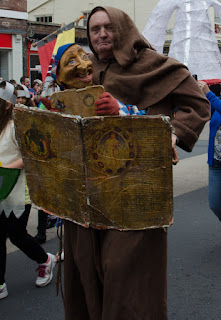 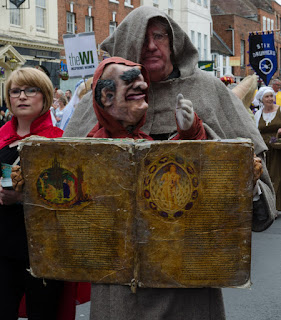 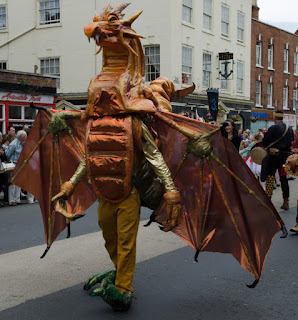 Oh look and who's that old bird with the Mythago flag...except she shouldn't have been carrying the flag at that particular point in the proceedings...instead she should have been dancing, but she hadn't spotted her name on the schedule. I idly wondered which dancer was missing and causing mayhem behind me little realising that I was the culprit. Oops!