Tales from the Minster

Wimborne Minster...bursting at the seams with tales from yesteryear and rare artefacts spanning the centuries of its existence.

A roughly hewn Saxon relic box. It must have earnt the church a pretty scillingas. Blimey I'd have paid to see some of Thomas A Becket's blood or the hair shirt of St Francis. They also had a bit of the cross, part of the manger and even apparently hairs from the beard of Jesus himself amongst their treasures. 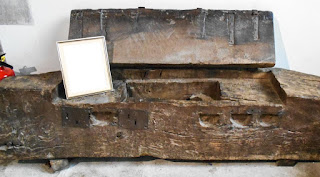 This corbel is a tiny little thing from the early 1100s. It depicts Moses and as for that natty facial hair I think the competitors in the World Beard Championships could do no better than to look to this for inspiration! 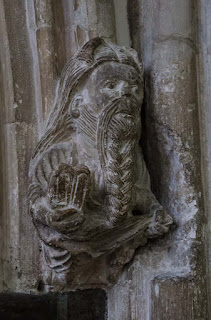 If it's bursts of colour you're after this building has it in spades. From medieval wall paintings [not shown] through to modern day stained glass, many styles from many different periods are represented. The astronomical clock dates from at least 1409 when it first appears in the written records and the quarter hours are chimed by the Quarter Jack on the outside of one of the towers. Originally the figure was a monk, but he assumed his Grenadier Guard persona during the Napoleonic wars. 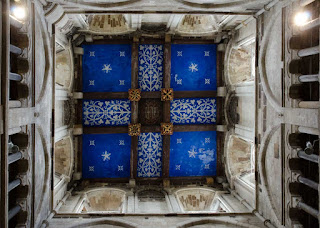 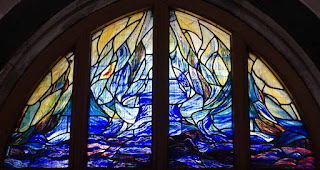 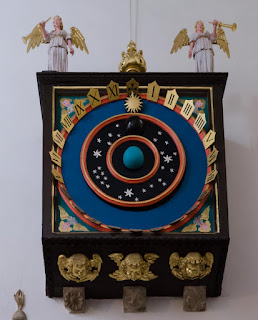 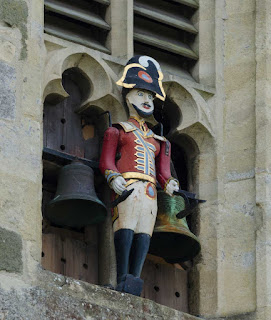 The man in the wall. Anthony Ettricke was the somewhat eccentric Recorder of Poole and the magistrate who sent the Duke of Monmouth to trial. The good people of Wimborne had offended him and thus he declared he would neither be buried in their ground nor above it. Instead he gained permission to have his tomb placed in a niche in the church wall within his lifetime. He was a chap who knew his own mind and if the scriptures said he would live only for three score years and ten then he was confidently able to have his date of departure of 1693 carved upon his coffin in advance. Unfortunately the powers that be didn't play ball and he lasted another decade. The date had to be amended!

One of the joys Wimborne Minster is known for is its chained library. With only four in the country, it's open a few hours a day for viewing. Holding over 400 tomes and pieces of music many are in excess of 300 years old. The chains are so that the books can be taken off the shelves without damaging the spines and were replaced by the Victorians. 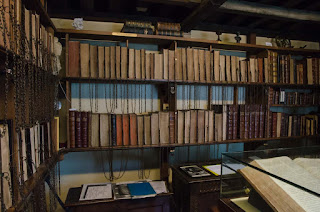 Now you know it had to happen....a post without a spot of carved madness would not make it on to this blog now would it. I've done the sensible stuff so I shall end on a note of silliness and then frankly a bit of downright rudery with the last photo. This one is hidden away in a dark corner high away from prying eyes. Euphemistically apparently it comes under the umbrella of "Male Exhibitionist". Nowt more one can add to that is there really! He is registered as part of the Sheela-na-gig project. 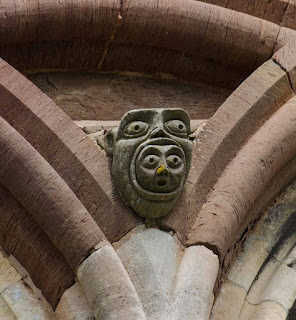 Romanesque bear/dog with rabbit and cat with a rat. 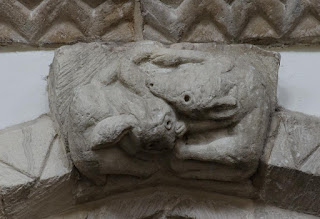 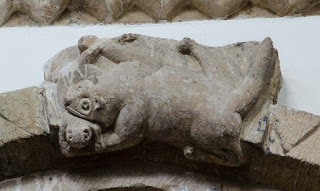 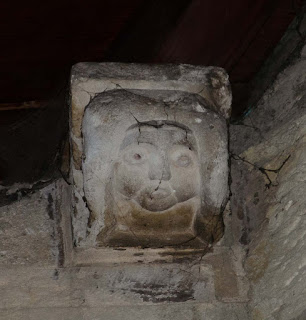 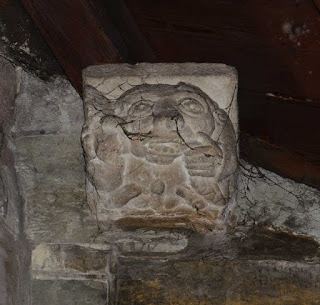