I can't speak for others, but I have found sometimes that places can have a real atmosphere. Mr GBT and I have often commented to one another how some NT properties, irrespective of size or grandeur, can feel incredibly homely, indeed as if the occupants are just out of sight still, whilst others are impersonal or quite unsettling. I remember once years ago viewing a flat and picking up an overwhelming sense of sadness. It was immediately apparent that I could never have lived there and frankly I couldn't wait to leave. Afterwards the estate agent revealed that the elderly owner had been moved to a nursing home against her wishes by her family.

It's been the same visiting churches. The vast majority of them don't affect me emotionally. I might not like them, but it doesn't go beyond that. St Thomas's in Salisbury I found really oppressive and quite frightening really. It gave me the smallest sense of what it might have been like for people in the past and I found it interesting that the others I was with experienced a similar reaction.

Thankfully my visit to St Michael's in Amberley made me feel quite the opposite. Perhaps it was the blue skies with the drifts of Oxeye daisies in the churchyard. Nothing screams out for your attention, yet it is charming. Both the exterior and inside have plenty of little gems to offer if only you take the time to stand and stare. You know by now that I'm not an artistic soul but somehow it just seems right  this time to offer the subtle details of previous visitors in a more muted form, so I've opted for the monochrome version save for the last shot. It's the very choice of colour and the Pre Raphaelite faces which turned my head in the first place. 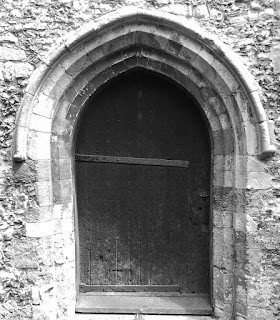 A hand carved gravestone dating from 1700 and now resting against the wall. 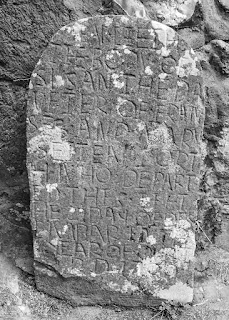 One of a series of carvings on the choir stalls. 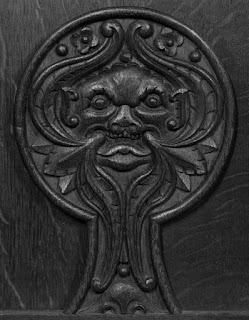 Mass dial or scratch dial as they are sometimes known. 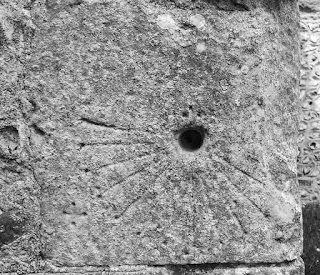 Designed by Veronica Whall. An unusual female presence within the male dominated world of the Arts and Crafts glass scene. She's the artist behind the windows in King Arthur's Great Halls in Tintagel too. 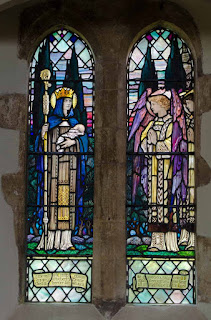