A Strange Set of Coincidences 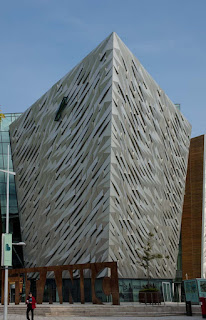 From frequent mentions in the press anything Titanic related is always a huge news story. For me though, beyond it being a terrible human tragedy, it's never really been on my personal radar. When in Belfast last year we visited the Titanic exhibition [my chaps wanted to go]. It was interesting, but I chose not to blog about it.

An old college friend though is fascinated by the whole subject and is tremendously knowledgeable. Jack Phillips, the chief wireless telegraphist came from her home town and he is locally celebrated [there's a pub named after him]

Recently J has been to Belfast herself and when she came for lunch a few weeks ago she mentioned that apparently one of the victims came from Horsham. Had I not just read a local survey of one of our redundant graveyards a matter of days before I would have been amazed as there is no mention in the local museum or a commemorative plaque anywhere. The town is silent about this chapter of our history, but yes tucked away at the back of the cemetery is a rather unkempt gravestone which makes a brief mention of this sad loss at the bottom. 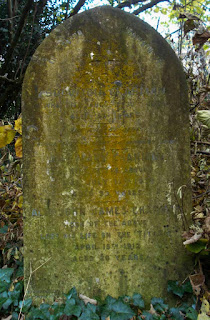 John James Charman was a young saloon steward on his first voyage. His body was not recovered, but poignantly he is immortalised in stone on his parents' grave.