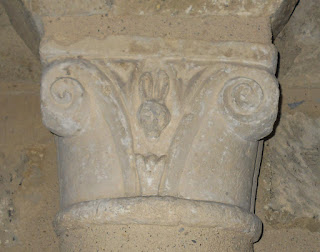 This fellow is apparently suffering a bit of an identity crisis as, depending upon what you read, it is either a 12th century head of a hare or a rabbit. Most seem to favour the former option, as do I with those long upstanding ears. It reminded me a bit of Bugs Bunny who is supposedly a hare too. Whatever the correct answer it is to be found on the chancel in St Margaret's church, Eartham, West Sussex. We were pushed for time so no other photos this time I'm afraid, but I wanted this one as I've only ever seen a whole rabbit depicted before.

If it does transpire it's a rabbit there were strangely disturbing ideas circulating about the bunny in the Medieval Mind if this set of manuscripts is anything to go by!🐰 https://www.thepoke.co.uk/2015/04/05/10-medieval-rabbits-didnt-mess-around/