According to Wikipedia, the so called Geneva Bible [many of the Protestant scholars fled to Geneva during the reign of Bloody Mary] is one of the most important versions of the English Bible translations. It was mass produced and available to Joe Public. Shakespeare would have been familiar with it and a copy was carried on board the Mayflower. Sometimes things did rather get lost in translation though. 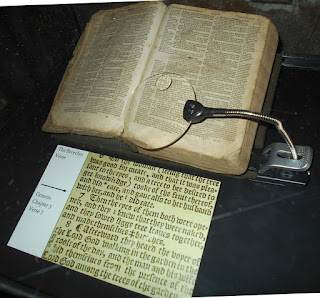 There aren't many of these Breeches Bibles surviving,but this treasured example is in St Peter's, Chester. It gets its name from the mistranslation of "loincloth" into "breeches" in Genesis, Chapter III,  verse vii. People found it rather humorous, but this attitude was not to be tolerated and later versions were changed to the more sober "apron".