Oh woe is me! Would you believe that I have been moaning for weeks that everybody else has had a slice of the action....the wonderful year of Painted Ladies I mean. Blogs have had joyous posts and stunning photos of these beauties....me not a murmur. Wasps galore [that's fine. They are very important pollinators], but I am a butterfly collector....a collector of butterfly photos not the real thing you understand. Obviously this whinging has remained as an inner dialogue only as it's rather indulging my toddler tantrumimg self otherwise.

The little star aka Mr GBT has come up trumps once again. His steam powered phone has died [unlike my one which is still soldiering on], so his replacement has come with a decent camera. This was the first photo he took with it. I love that little patch of green fur behind its neck. Apparently the little devils have been frequenting our raspberry bushes while I have been out earning a crust. 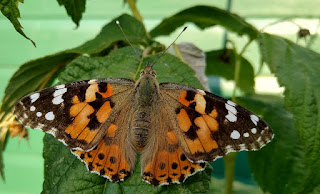 Thankfully I saw two with my very own eyes in the garden the next day, so I can stop stropping now!!