On the horns of a dilemma. 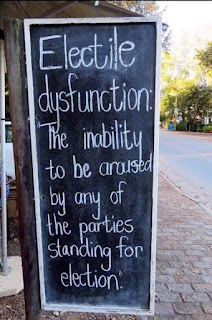 Much as I hate to admit it I do share more than a little of the sentiment expressed in the above photo. Perhaps I'm just very cynical but all those glossy manifestos are to my eyes just a marketing ploy to get my vote...what is promised and what is actually delivered are two very different beasts. Stepping aside from the mainstream parties though it doesn't mean to say that I don't derive a little mirth from the the looming election......

In my innate wisdom and sheer nosiness I decided to peruse the entire list of all the candidates standing in the country...all 222 pages of it. It made for some interesting reading....I've narrowed it down to my two favourite parties.

Church of the Militant Elvis are proposing that there should be a free neutering for all stray cats and Boris. They have suggested that Noel Edmonds should be brought in to negotiate Brexit after all the experience he has amassed in his years of hosting "Deal or No Deal" With regards to another People's Vote the options should be A] In the EU B] Out of the EU and C] Pretend to leave but stay in. Amongst all their tongue in cheek suggestions they do have some very heartfelt and serious ideas.

The Official Monster Raving Loony Party are fielding lots of candidates this year. As ever they are having no truck with anything that smacks of being sensible and they have faithfully promised that they will not be acting upon anything from their manifesto. This is their complete list of "policies" http://www.loonyparty.com/proposals/policies-a-z/ I rather liked the naughty suggestion that all our MPs should do half an hour of Tai Chi every day to counteract the 231/2 hours they spend on Chi Ting!

I wonder how Count Binface [formerly known as Lord Buckethead] will fare in Uxbridge...his major rival is one Mr B Johnson! Unfortunately here in Horsham we have no such political shenanigans. Unless enough people do a complete about turn we will remain true blues as we return the highest Tory majority in the country. It gets ever so slightly controversial when disgruntled folks express their displeasure by voting for the Lib Dems in the local elections, but they always revert to form as soon as we're back in a General one. The only alternative for me is the Peace Party here, but if I was going to go off piste then the Independent Captain Beany from Beanus might win my support. He's been standing since 1986 and does a huge amount of fund raising for charity. He is also the founder of the Baked Bean museum so frankly what's not to like eh!!