Consuming not all consuming.

Shopping...these days it's something I do when needed [although the occasional ahem spontaneous buy does sometimes get under the radar!]. I never was one for shoes and that hasn't changed so it was somewhat reluctantly that I set out to replace my well loved, but worn out black boots.

Frankly I didn't relish the experience. I went into a handful of shoe shops to see what they'd got in stock and could very quickly see that nothing appealed nor did some of the prices. A quick tour of the chazzas only produced what I would term fashion boots with skyscraper heels or made out of unsuitable material like suede. Believe you me I can find that single puddle within a five mile radius and step in it. I've ruined suede before on the first wearing so am not to be trusted.

Arriving back at GBT I was a bit hacked off with the whole thing,but being a woman on a mission I decided to give Ebay a whirl. Now I'm not the right person for online bidding and have only used the buy it now option before occasionally. This time though I discovered that some buyers offer you the chance to make an offer.....well my luck was in and I now have exactly what I was after and all for a very modest outlay and preloved. I'll spare you the photo [they're practical rather than thrilling], but this has left me some birthday money over [which was what I was using] for more exciting things.... 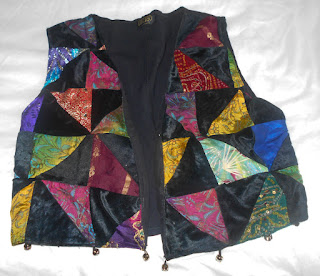 For anyone who follows Vintage Vixen's blog this was featured on one of her recent posts. It had my name all over it and I simply couldn't resist. It had its first outing to a ceilidh on Friday night!