You had one job to do!

"Why don't you choose a new statue for the garden" Mr GBT said. Now I've looked and looked over the past few weeks, but really have struggled to find anything that I really like. I work very much on gut reaction and nothing spiked any interest. I sort of half heartedly narrowed it down to a dragon I found on Etsy, but then decided to see what else the maker was selling. Big mistake😆....apparently one group of statues is not the same as one singular. Too late I'd found my perfect ones....thank goodness for pocket money [having completely smashed the budget we'd set] and that Mr GBT is very easy going about such matters. It helps that he rather likes them too. Numbers never were my strong point. 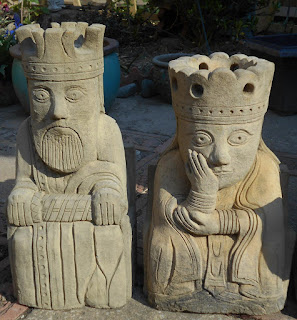 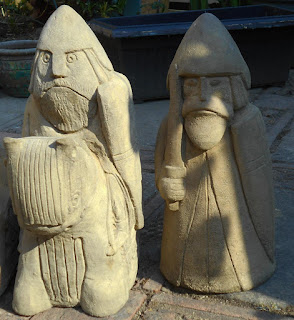 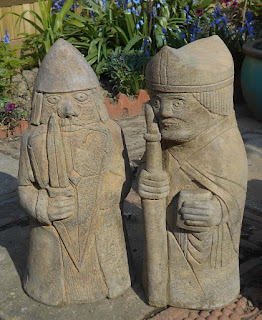 I'm sure many will recognise these as being based on the famous Lewis chess pieces. Discovered on Lewis in 1831, most of the original pieces are now on display in the British Museum and the National Museum of Scotland [the original find was split up and sold and some pieces have not come back onto the market]. Most probably they were made in Trondheim [Norway] and most are made from walrus ivory with a few being out of whales teeth. It's recognised that they come from several different chess sets and some had remains of red paint on them [no longer visible] when they were first found. Although the Queen looks like she's thoroughly cheesed off her expression was intended to convey contemplation and wisdom. The one chomping down on his shield is a Viking Beserker. They were an elite fighting force known for their lack of fear on the battlefield. However, they trod a fine line between brilliance and madness and sometimes their refusal to fight according to the battle rules laid down could lead to fatal consequences for those fighting with them. The bearded fellow next to the knight on the horse is the warder. In July 2019 an original warder was sold by Sothebys for £735,000 to a private buyer. It had been bought by an Edinburgh antiques dealer in 1964 for a fiver and then passed down to his daughter. It was treasured by the family, but kept in a drawer for safekeeping. No one had any idea of its true origin!

I'm delighted to have been able to support an independent UK business in this way and more importantly they make me smile every time I catch a glimpse of them in passing.