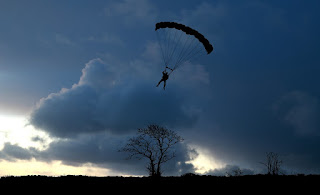 [Image from Pixabay]
Dolly [Elizabeth] Shepherd dreamed big. By the age of 16 she was waiting on tables at Ally Pally, but this was never going to meet her need for excitement and an overheard exchange between two customers led to her having the opportunity to stand in for Buffalo Bill's [William Cody] wife when she was unwell one night. Ever the showman he shot an apple from the top of Dolly's head whilst blindfolded. This didn't deter Dolly's thirst for danger and after Cody showed her round the aeronautical workshop at Ally Pally she encountered Auguste Gaudrun, a French balloonist and parachutist.
Being what we in modern parlance might term an adrenaline junkie she leapt at the offer he made her of joining his parachute team. By the age of 17 she was being flown up to heights of 2-4000 feet whilst suspended on a trapeze below a balloon. At this height she would then parachute back to earth. By 1905 she had managed the first ever mid air rescue when another member of the team's parachute failed to open. Dolly brought both of them back to earth, but broke her back on landing and wasn't expected to walk again. However, she was a gutsy young lady and despite the dire predictions she regained her mobility after treatment. The danger she faced was brought sharply into relief when Edith Maud Cook died from injuries sustained in 1910. It was a jump that Dolly had originally been due to take. By 1912 she decided to step away from her career, but not from putting herself in personal danger. She served in both World Wars and in 1976 she was invited to join the Red Devils. She flew with them aged 90 and they did a fly past at her funeral in honour of her incredible life.
It goes without saying that I have no such grand plans for this weekend and am intending to keep my feet firmly on terra firma! Have a splendid weekend.
Arilx
at September 03, 2021