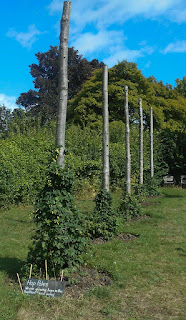 These are hops grown in the traditional way along wires strung between wooden poles. The branches are called bines and September was the traditional time that people came out of the poorer parts of London together with members of the travelling community to counties such as Kent and Hampshire to earn themselves a small amount of money to pick the hops. It's been going on for centuries, but it became a popular way for people to be able to afford a few weeks in the countryside and almost a holiday. The whole family would go and despite it being a 5am start and hard work it was a chance to socialise and spend your evenings round the camp fires. Everyone lent a hand stripping the hop flowers off from the bines and throwing them in the bins for the tallyman to weigh them. It became such a tradition that even some of the railway companies got in on the act and ran "hopping specials" from London to Kent.

All of the harvesting work was bound up with rituals, but the hopping ones seem to have had few recorded. However, looking through my books and online it seems that there was definitely a penchant for the pickers to throw people into the full bins. One source said it was kept solely for newcomers who would be held in there until the person agreed to kiss the oldest, plumpest woman or pay a monetary forfeit to avoid it in the first place. Another version is that a man and woman would be put into the bin and covered in hops as some sort of saucy fertility rite. At the end of the season there are records of a King and Queen being chosen and dressed in ribbons, but the genders would have swapped roles and a harvest celebration with eating and drinking would follow and in Herefordshire it was deemed lucky to burn their old boots before they left. In the end mechanisation signalled the death knell for the hop pickers and now all we have left are the oral and written recollections.

I think I might crack open a beer [not ale...that's unhopped] in celebration of this rather wonderful green flower! Have a great weekend.