Yew better not believe it! 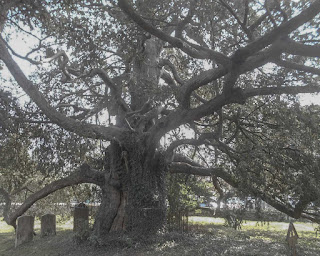 Back in 1977 the villagers of Capel in Surrey decided to celebrate their yew's 1000th birthday by holding a dedicated pageant. Attaining that great age was certainly something to mark, except that when it was reassessed in 1993 its age was recalculated to be 1700 years old! It's thought that originally it was one of six trees forming a sacred grove around a pond [now filled in]. The local legend has it that if you walk around it 100 times at midnight a ghost of some description will appear, but it's a little light on the specifics! While we were there I couldn't stop but stand back and admire the scarlet berries with their waxy coats....how many generations stretching back before me have stood there and done just the same I wonder!