The circumstances of the past few months has forced many of us to look closer to home to find things to do. I am just so pleased now to be able to travel further afield again, but over the winter months you will have seen many walks documented here where I just pounded the pavements of my own town. It surprised me just how much these little explorations turned up and just how much more I have seen and learnt. I only headed for the older streets as modern developments hold little interest for me, but it had been slightly irritating me that I had one small part yet to visit before I completed the project. Finally I got back to it after I finished work earlier last Friday.
Nowadays Roffey is a part of North Horsham and where I went to junior school when we moved here, but once it was a separate village that has been swamped by later development. Its original name was Roughheath [sometimes with other spellings] and it was just that a piece of rough heathland with some fir trees. Parts of this same landscape still form part of the local woods, but they are now valued as an increasingly rare habitat.
Despite it being a relatively short potter and it not being the posh end of town, I did manage to turn up a few bits and bobs that appealed to me.
I can't explain why, but there is something I find endlessly joyful about sunflowers....even better when they're peeking over somebody's wall like naughty children! 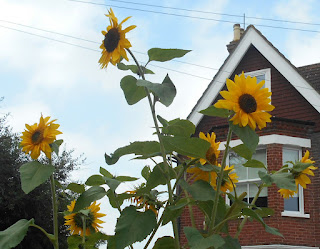 Autumn is my favourite season and September my favourite month [not that I'm biased being a September baby and all that!]. Am sure that this will look stunning in a couple of weeks time 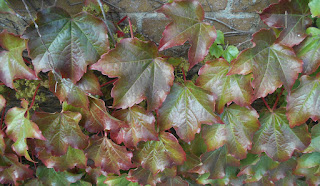 One of the original Victorian enamel road signs. There aren't many left around here these days, so it's good to see this one still in situ.

You know me and my love of clever wordplay....another one to add to my ever growing collection.

Fancy brickwork above a door. It adds interest to the front of this 19th century terraced house. 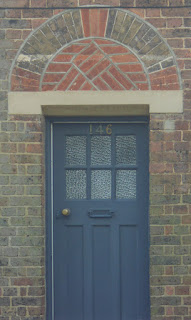 This timber bungalow is most unusual for this part of the world. I'd expect to see this in the coastal areas. Houses of the early 20th century tended to be be brick built as we are on clay here. I found out recently that a descendant of the original family still lives in it all these years later. 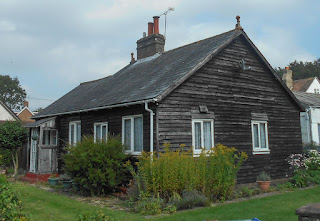 This one is now private apartments, but it started out life as the final incarnation of the Union Workhouse which had moved sites a couple of times during its history It was designed by Hallett and Newman in 1838 and had a capacity for 250 inmates. In 1861 the Poor Law Board published a national report for all the paupers who had been living in the workhouses for more than 5 years. Some of the descriptions and reasons for staying make for grim reading, but are of the time. Reasons given include "born an idiot", "of weak mind" and "age and infirmity". On the 1881 census the language has changed a little and now people are referred to as "imbecile" under the handicap category. Most were listed as inmates, but a few were singled out as vagrants. The youngest of these was a little girl called Agnes aged 2 who was part of a family group who had been admitted. They must have been desperate. 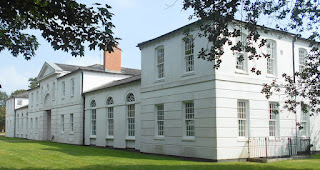 To finish on a rather more upbeat note an instantly recognisable house sign and one of the road signs which somebody has planted beneath. There are a liberal handful of these sprinkled throughout the district and they really do add a welcome splash of colour. 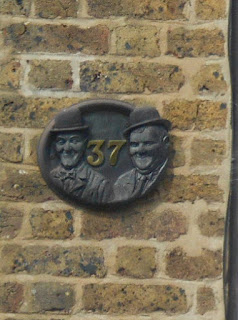 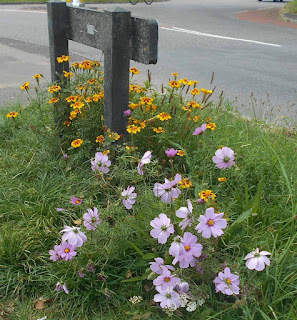 This is what I was doing whilst Mr GBT was rescuing the sparrowhawk [see yesterday's post]. See why I really couldn't compete in the excitement stakes!!
Arilx
at September 07, 2021