When the vacuum cleaner's out.....

Call it gut reaction or what you will, but when I came in from work last Friday and saw the vacuum cleaner out I knew something had happened. TYM was away and Mr GBT never hoovers for the fun of it. Usually it means that either somebody has been doing a job that's made lots of mess or something has got spilt. Finding Mr GBT beavering away at his furniture making I asked him what had happened.

Hearing lots of clattering sounds coming from downstairs Mr GBT's first thought was that Humphrey had brought something in, but there he was lazing around on our bed as usual yet looking slightly alarmed at the racket. Wondering what on earth was going on then he went into the lounge to be greeted by the carpet being covered in a layer of feathers and one of these trying very hard to fly through the closed window! 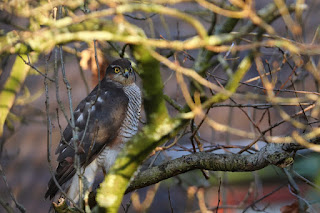 A sparrowhawk no less! It must have flown through our open back door with its prey and then plucked it on our rug. Having tucked in it then found it couldn't get out again and was starting to panic. Fortunately Mr GBT is a sensible soul and rather than flapping about [which is what I would have done] he picked it up making sure its feet and wings were secure. He had a quick look at it, but didn't like the way it was eyeing up his finger when it turned its head towards him so released it pretty sharpish. Am pleased to say that it flew off fine and doesn't seem to have suffered any ill effects after its little adventure. We think it was one of this year's youngsters as it hasn't yet got all all of its markings. It made my walk I'd taken that afternoon look quite dull by comparison!!
Arilx
[photo from Pixabay....Mr GBT wasn't really in a position to take any!]