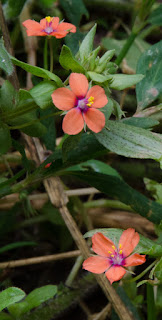 Poor Man's Weatherglass so called because it only opens its flowers when it's sunny. Found growing on the edges of fields and rough ground, it is one of our few native arable weeds. Many will know it by its more common name of the Scarlet Pimpernel. Strangely, the same plant grows in Spain and has the same name yet the flowers are blue! It's known that this is due to the sunnier climes, but as yet it remains a mystery why they are blue rather than one of the other known colour variants. On a personal note it is my favourite flower and the first one I ever correctly identified from our wildflower book. I am always secretly thrilled when we happen across one during one of our wanderings.