A Day of Loss and Celebrity

Before I start....there is going to not be one word about the events across The Pond. I'll keep this as a breathing space for silliness and light relief for people today methinks.

Yesterday the bunting was out and the flag was hoisted high for I had a day off.  Huzzah! This fellow meanwhile was just off. 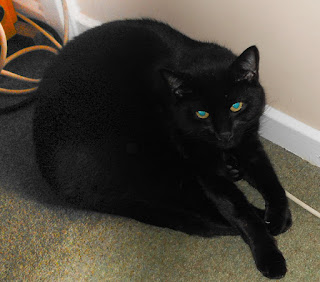 Humphrey had got wind of the fact that it was the day of the Annual Visit to the Vet for his jabs. Thankfully we had blocked off all his escape routes [it 's amazing how such a portly soul can squeeze into such a tiny space!] so his stout little legs didn't get him far before we caught up with him and incarcerated him in the Box Of Doom. I literally live two minutes away from the vet, yet he wailed like a banshee the whole time. Such a big girl's blouse.

Now I'm not a great fan of these little trips really. I mentally prepared myself for another gentle ticking off about him having gained yet more weight. I had my script and defence prepared.."yes he only has the recommended dose of the diet food twice a day, but he also regularly indulges in an overnight snack of petit-furs which I can't monitor." I don't mention that he's on occasion he's been fed twice...he always scarfes down his food immediately and is happy to tell you that he's not been fed a single morsel an hour later. I only knew he'd eaten on Saturday when I came in because the teenogre had left a note saying "fed" next to his bowl! Amazingly though he has lost weight....he has been frantically searching for it since we got home!

I meanwhile have been moving in the upper echelons of society....I met the Queen yesterday....she was working outside a local cafe. Times must be hard! 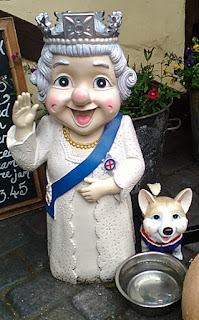 'Tis a thing of great beauty I'm sure you'll agree. Made me smile though and crikey we need it more now than ever!