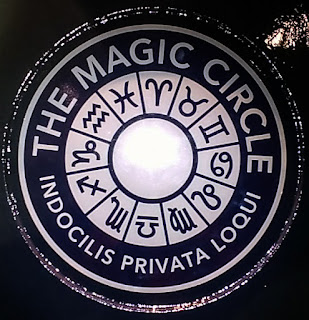 Yes another birthday treat...my parents very kindly paid for us all to attend a live show at the head quarters of the Magic Circle in London.

Now many of us who grew up in the 1970s will have been fed a diet of Saturday night TV with more than its fair share of magicians. There was a lot in the way of light entertainment on offer back then and with only the three channels to watch not a great deal of choice. I've always enjoyed the spectacle of it all...the amazement and the smoke and mirrors used to create the illusion.

Magic has been performed since the time of the Egyptians....indeed the conjuring balls and cups is a trick still very much with us today. The word itself is derived from the Greek "mageia" meaning ritual and the oh so familiar "abracadabra" once appeared on amulets as a protective charm against dangerous and life threatening diseases.

The show itself consists of a series of close up performances. Once or twice I was able to work out how the magician had completed the trick [sitting in the front row with a sideways view helped], but most of the time I was completely foxed and spellbound. There seemed to be a lot of additional movement with the hands which I felt was designed to distract and confuse the brain of the observer. The second half was stage magic performed in the theatre...again equally impressive.

I don't want to give too much away as I don't want to spoil it for others suffice it to say that it was a chance to do something completely different. The whole evening was very special.