Anyone who grew up watching Blue Peter will recall the various cooking spots over the years. Due to a lack of love of time spent in the kitchen my cooking has remained at that kind of level. If Mr GBT cooks you'll get a fine dining experience if it's me then it's more Scout Camp in style. Tasty, straightforward and lacking in the looks department.

Due to the inclement weather yesterday we scotched our plans for a walk along the Devil's Dyke [part of the South Downs], so chum H came for lunch and an afternoon of catching up. Having fed her Monday Pie and apple crumble I had also baked some of these to go with a cuppa later. 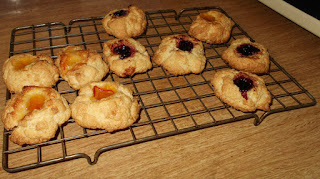 "Care for a sticky blob?" I asked her. Raising one eyebrow rather quizzically, she asked me why they were called that. "No idea" I said "it's just the name of them in the Be-Ro recipe book". They tasted rather good and this was all that was left later. The original recipe is here http://www.be-ro.co.uk/recipe/showrec140.html?rec=140 You will be relieved to hear she's still standing this morning ;-)