If the rhyme is to be believed "slugs and snails and puppy dog tails". From my personal experience may I be so bold as to add to that little list that mine was, in addition, a dirt magnet with an abiding interest in all things bottom related. Recent decluttering activities in the loft have unearthed this and stirred a few memories in the process.

We always did do a sophisticated line in reading here at Gnat Bottomed Towers. Beyond Elmer the Elephant this rated amongst the favourites.... 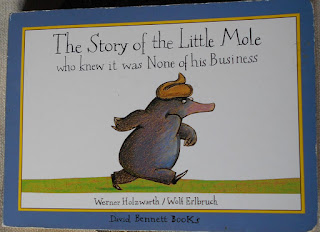 The story of a little mole who is quite rightly aggrieved when he pops his head above ground only to have some darstardly soul drop a whoopsie from above which lands upon his head. Rather than let this unpleasant episode go unpunished, he sets forth to find out who the perpetrator is, so that he might wreak his revenge. For anyone desperate to know who the guilty party is.... being such a kind hearted soul I have managed to track down an animated version for you. I'm all heart you know!!

I think though the small person might have been classed as a superfan at the time, for, not only did he have the book, but the toy mole resplendent with a little whirl of poo on the top of his head and kindly grandparents who took him to see the show no less!

I should add in that we also had the whole series of "Walter the Farting Dog" and again the toy which made appropriate noises, but if my memory serves me right, I think that may have been rehomed to the younger brothers of one of his friends when he had outgrown it. As I said before we always were a sophisticated household here at Gnat Bottomed Towers. The mole book is staying put!