Humph in a Grump 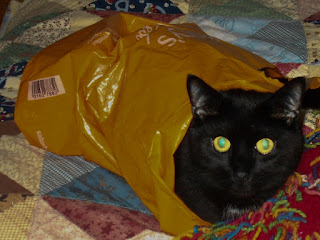 Don't be fooled by the big googly eyes or the air of apparent innocence...fifteen seconds earlier he'd had his ears back and his eyes slanted like the devil incarnate as he swiped an unsheathed paw at the teenogre who tried to give him a stroke in his bag of choice. This normally placid fellow was having one of his rare offdays. He'd taken umbridge when I'd snatched away my feather duster after I'd caught him "killing" it and pulling bits off. Not much of a feather duster if it doesn't have any feathers is it now! Haughtily he stalked off and sat on the lid of the compost heap pointedly ignoring everyone, until he felt we had earnt his forgiveness.

Unfortunately within minutes of his triumphant return he and I had clashed again for I had turfed him off the dining table in disgust. He knows full well that he's not allowed up there.....his rump is to remain firmly away from any sites of human food consumption/preparation whether that be the afore said offending wooden article or the kitchen work tops. It's non negotiable in my book. Hence his retreat to the orange plastic bag of choice to lick his wounds and regroup.

I am pleased to report that today he is back to his more usual default setting of friendly, cuddly and starving. He's a big cat if he's in a grump and not to be messed with!