A natural inlet of salt marshes and lagoons and now a R.S.P.B reserve...throw in a glorious January day and watch the magic unfold. Big skies, beauty all around, but tarry not for the tide comes in apace and you could be swimming rather than walking before you know it! 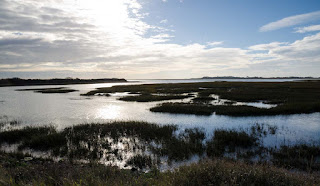 Surprises abound. This is the restored Salt House...it will not surprise you to find that indeed it was once used to store precisely that....salt. During WWII it saw service as a base for the Home Guard. 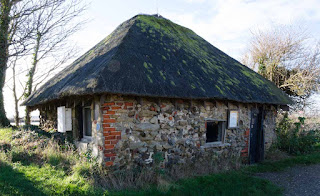 What does one do with a non seaworthy vessel...why upcycle it into a shed in your coastal garden of course. 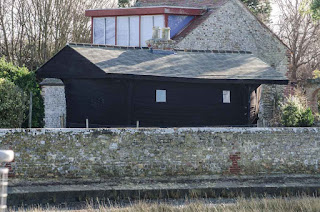 View across the reed bed as the tide started to come in. The area is known for its overwintering flocks of birds. These were Brent geese which had just landed.

Speaking of birds...if I see an imitation bird upon a thatched roof I "know" what it's going to be don't I. Hardly worth a second look as they're always pheasants in my experience. I was in for quite a surprise when I looked at Mr GBT's photos....first time I've ever seen someone have a pigeon on top of their home! Rather splendid I must say, although something rather strange does seem to have happened to the proportions of his head! 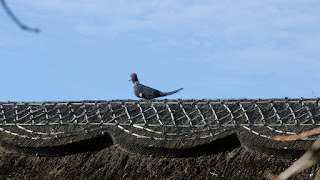 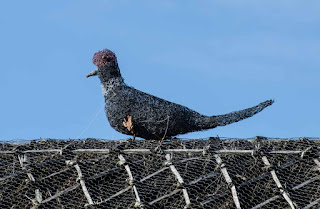 We were there primarily to see the birds....Lady Luck was on our side, so avian photos to round my walk off tomorrow.

P.S Having looked again a the shape of the "pigeon" I think Winters End Rambler is spot on- it is a pheasant. The colours still put me in mind of my first thought though!