Tales From The Riverbank

One of the things I enjoy about walking is that the usually reserved British public will often share a hello or even a few words. I met a fellow litter picker yesterday and we did precisely that....a particular sore point we agreed is those individuals who seem to think that decorating the trees with little hanging plastic bags of canine fecal matter is acceptable. I will pick up most sorts of rubbish but not that! Anyway swiftly moving on. Sometimes these brief exchanges result in the telling of a tale.....

Ambling across one of the fields we encountered a lady of advancing years who emerged from the hedge. Initially I didn't make eye contact.....well we hadn't been formally introduced had we now, but she seemed keen to make our acquaintance. Her name we found out was Mia and she was taking a short cut in order to get home faster. Mr GBT looked a little startled though when she then proceeded to start howling.....reassuring him I told him that like W's akita, that's the noise malamutes make rather than barking as a means of greeting. I had been a little wary initially as I am with any dog who is not on the lead. I work on the basis that the chances are they are friendly in these circumstances, but it pays to be sensible. With no ears back or baring of teeth she happily sniffed our hands and then sat down for a stroke. After a couple of minutes I could hear her owner calling her [she had a collar with her details on] and she half heartedly turned her head and cocked an ear. Eventually a lady appeared to claim her....apparently unlike her other malamute Mia detests walking and if she can get away with it she sneaks across the brook and sets off on the shortest route as quickly as she can. With her thick coat she was rather keener to be out when it snowed last week! 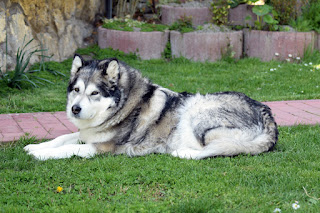